We are ProleWiki, a communist (Marxist-Leninist) project founded in September 2020. Our aim is to build an anti-imperialist and proletarian collaborative encyclopedia, with information on current events, communist parties worldwide, countries, and more. We also host a library of texts important to the international proletarian movement, from Marx and Engels to Lenin and Stalin. Since our beginning in 2020, we currently have 1,686 articles and counting. 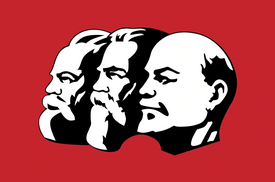 Marxism-Leninism is an ideological framework that originated in the application of Marxist theory to revolutionary practice by Vladimir Lenin and the Communist Party of the Soviet Union. It is based on Dialectical Materialism, the materialist conception of history, and Marxist political economy including the Leninist conception of imperialism.

After the success of the Russian revolution in 1917 and the establishment of the Soviet Union in 1922, many communist parties around the world began to adopt Marxism-Leninism as their political line, and Marxism-Leninism was the main theoretical framework which guided the Korean, Vietnamese, and Chinese revolutions as well as other successful national liberation and revolutionary movements in Africa and Asia.

Today, Marxism–Leninism is one of the theoretical foundations of governing communist parties in China, Cuba, Korea, Laos and Vietnam, and is the political line of many communist parties waging class struggle. .
Read further...
Contribute!