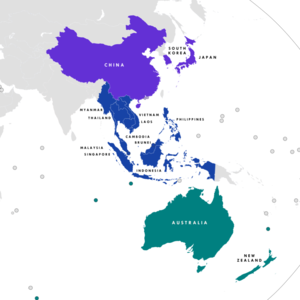 The members of the Regional Comprehensive Economic Partnership

The RCEP, or Regional Comprehensive Economic Partnership, is a free-trade agreement signed between 15 countries in Asia in November 2020.

It was first proposed by China in 2011 to reinforce economic ties and growth between countries in the Pacific region. After being signed, it is now the largest trade bloc in the world in terms of global GDP and population.

Notably, the USA was not invited to sign this agreement. Their exclusion from this trade zone will likely severely impact their imperialist operations in the region in the years to come.

India was invited to sign the agreement but declined, due to Modi's fascist views towards China and him aligning towards the USA.