Dictatorship of the proletariat 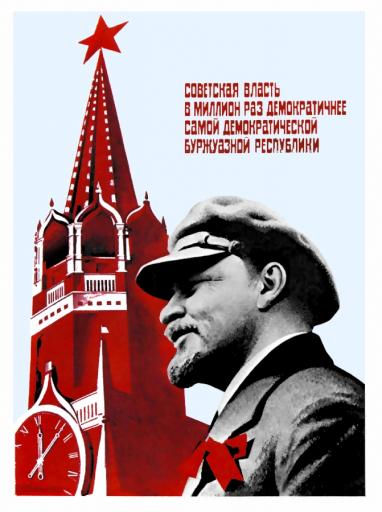 "Soviet power is a million times more democratic than the most democratic bourgeois republic."

The dictatorship of the proletariat, sometimes abbreviated as DotP, is a guiding principle applied in the transition to communism from capitalism. It facilitates economic development to a level at which communism can be implemented, and prevents counter revolution and sabotage from the international and domestic ruling classes.

As the state exists to assert the rule of one class over another, all class society is a dictatorship; the issue that generally drives the class struggle is who is the ruling class. As such, the DotP is not a dictatorship in the liberal, bourgeois sense of the term but a neutral qualifier as to the owner of state power.

Capitalism is usually referred to as a dictatorship of the bourgeoisie, as the bourgeoisie controls such a system and asserts their rule over the proletariat, thereby oppressing them.

Since there is always an oppressor and oppressed in class society (see also social class) due to the contradictions pertaining to the means of production and, more broadly, to the mode of production, it is important for the proletariat to become the oppressing class over the bourgeoisie if communism is to be achieved.

Use of the term by Marx and Engels

According to the Trotskyist writer Hal Draper, Marx and Engels used the term "dictatorship of the proletariat", or words very close to it, in 11 separate works. (In some of those works it appears more than once.)[1]

Examples of Marx's and Engels' use of the term (this list is not exhaustive):