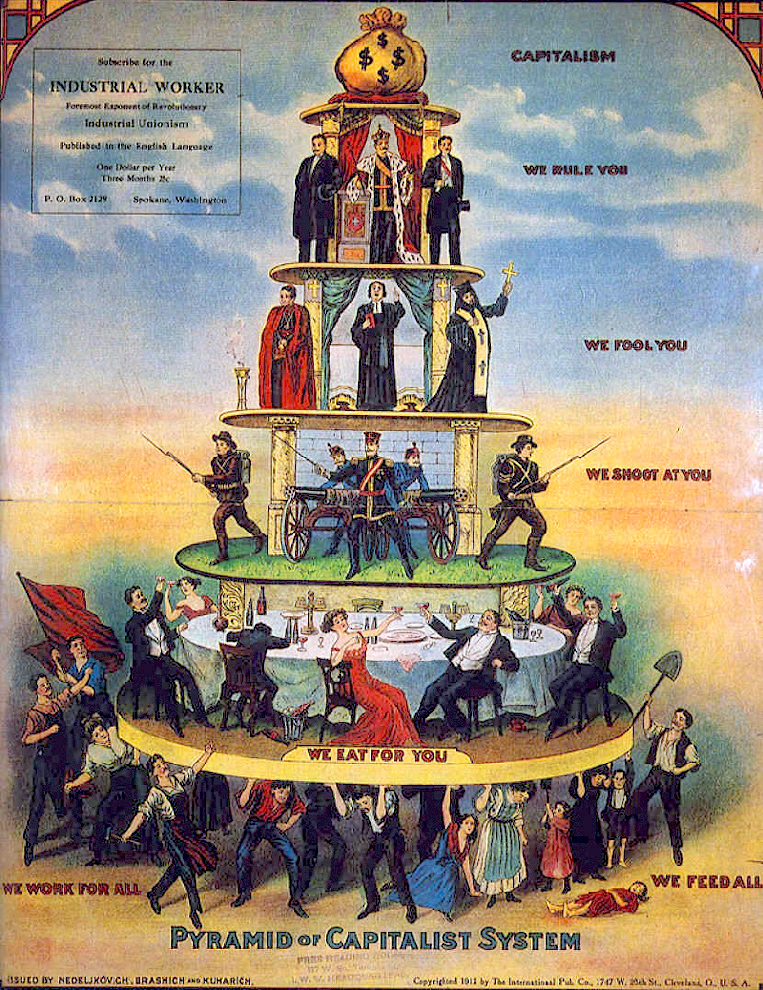 A IWW poster critiquing Capitalism by showing the class system

The rise of capitalism from the 16th century onward is associated with a decline in wages to below subsistence, a deterioration in human stature, and an upturn in premature mortality. Before capitalism, extreme poverty was very uncommon in world history, except perhaps in cases of natural disasters. Wherever capitalism developed, either through colonialism or through forced expropriation of land, it created mass poverty and general deterioration of working people's livelihoods.[1]

The main aspects of capitalism are listed below:

In the context of Marxist historical materialism, as serfdom and the small commodity production of artisans and craftsmen in feudal times was increasingly superseded by the emerging merchant class, increasing productive forces allowed for a change in property relations that led to the displacement of the feudal aristocracy as the dominant economic class in favor of the bourgeoisie. This occurred by means of several bourgeois revolutions. In this context, historical materialism considers capitalism to be a progressive development compared to feudalism.

The progressive historical role of capitalism may be summed up in two brief propositions: increase in the productive forces of social labour, and the socialisation of that labour.

— Lenin, The Development of Capitalism in Russia [note 1]

The definition of capitalism in scientific socialism is different from the one used by its adherents themselves. Liberals and pro-capitalist ideologues define capitalism as a combination of free market systems, private property, free competition and voluntary exchange.[3] This and similar definitions carry limitations that prevent capitalism's adherents from analyzing it in a holistic manner. The lengths taken by the bourgeoisie to justify the system and their profits include the denial of atrocities like the Bengal Famine or the Pinochet regime as 'not real capitalism'.

The fundamental contradiction of capitalism is that between the social character of production and the private capitalist form of appropriating the product of labor. [note 2] This contradiction expresses the profound antagonism between wage labor and capital, between the developing productive forces and the capitalist relations of production which shackle them. As the modern productive forces, based on large mechanized industry, develop, production becomes more and more concentrated, the social division of labor progresses, leading to a widening and intensification of the economic links between the various enterprises and branches of the economy.

During the production of each commodity, there is, directly or indirectly, participation of enterprises of different branches of production and hundreds of thousands to millions of workers, grouped in the capitalist enterprises. The process of production and work, through the development of productive forces is increasingly socialized. However, both production and its results do not belong to those who are really its creators — the workers — but to private persons, to the capitalists, who use the social wealth for profit, and not in the interest of society as a whole.

Under capitalism, the law is placed firmly "in the service of capital."[4] As Professor of Comparative Law at Columbia Law School Katharina Pistor further elucidates: "Through its courts, bailiffs, and police forces, states enforce not only their own commands, but also private property rights and the binding commitments private parties make to one another. This does not mean that state power is omnipresent. As long as the threat of coercive law enforcement is sufficiently credible, voluntary compliance can be achieved without mobilizing it in every case."[5]

Capitalism can be thought about using three levels of abstraction:

The Japanese school of Marxist economics founded by Kozo Uno has been particularly concerned to elaborate the middle level of analysis, which is nascent but not much developed in Marx's own works.

According to the Marxist economist Makoto Itoh,

The fundamental aims of the revolutionary socialist movement, which are usually expressed in the basic programmes, must be grounded on the basic principles of a capitalist economy, whereas the more concrete strategies and tactics must utilise the more concrete studies of world capitalism and individual countries at the levels of stages [mid-level] theory and of empirical analyses. (Basic Theory ..., p 66)