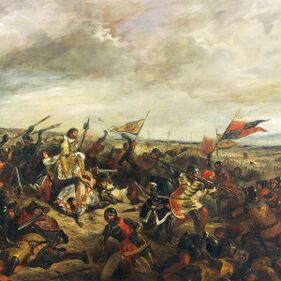 By the time of the hundred years' war (1337-1453), feudalism was the primary economic system in europe.

Feudalism was a mode of production dominant in Europe between the 9th and 15th century and in various other regions in different time periods. The feudal mode of production is characterized by the dominance of agrarian production by the peasants whose surplus labour was exploited by feudal lords in the form of rents, labour duties, taxes and so on. The feudal production relations constituted what Perry Anderson calls "an organic unity of economy and polity" in the form of parcellised sovereignties, meaning that the feudal lords as private owners enjoyed their own land and other means of production as well as their own armies, courts, and laws.[1]

In England however, starting from the 16th century a process began to emerge which Marx examines in Capital volume one under the name of primitive accumulation. The exact reasons are still disputed among marxist historians (see the Dobb-Sweezy debate and the Brenner debate), but eventually the feudal production relations in the English countryside gave way to capitalist production relations by the gradual expropriation of the peasants from land, which in turn transformed the English towns by the inflow of the expropriated peasants who were now the proletarians compelled to sell their labour power as a commodity on a large scale. This two-fold transformation of the production relations in the countryside and the towns gave rise to capitalism.

Two major classes existed in feudal society: the nobility and the serfs. Nobles became part of their class by birth, and were able to amass generational wealth by exploiting the surplus labour of the serfs. Nobles were granted land by the monarch and in exchange agreed to participate in their wars and obey their orders. The people that lived on this land would also become the lord's property.

In exchange for letting them use the lord's land, serfs would have to surrender part of their harvest or provide free labour to the lord.