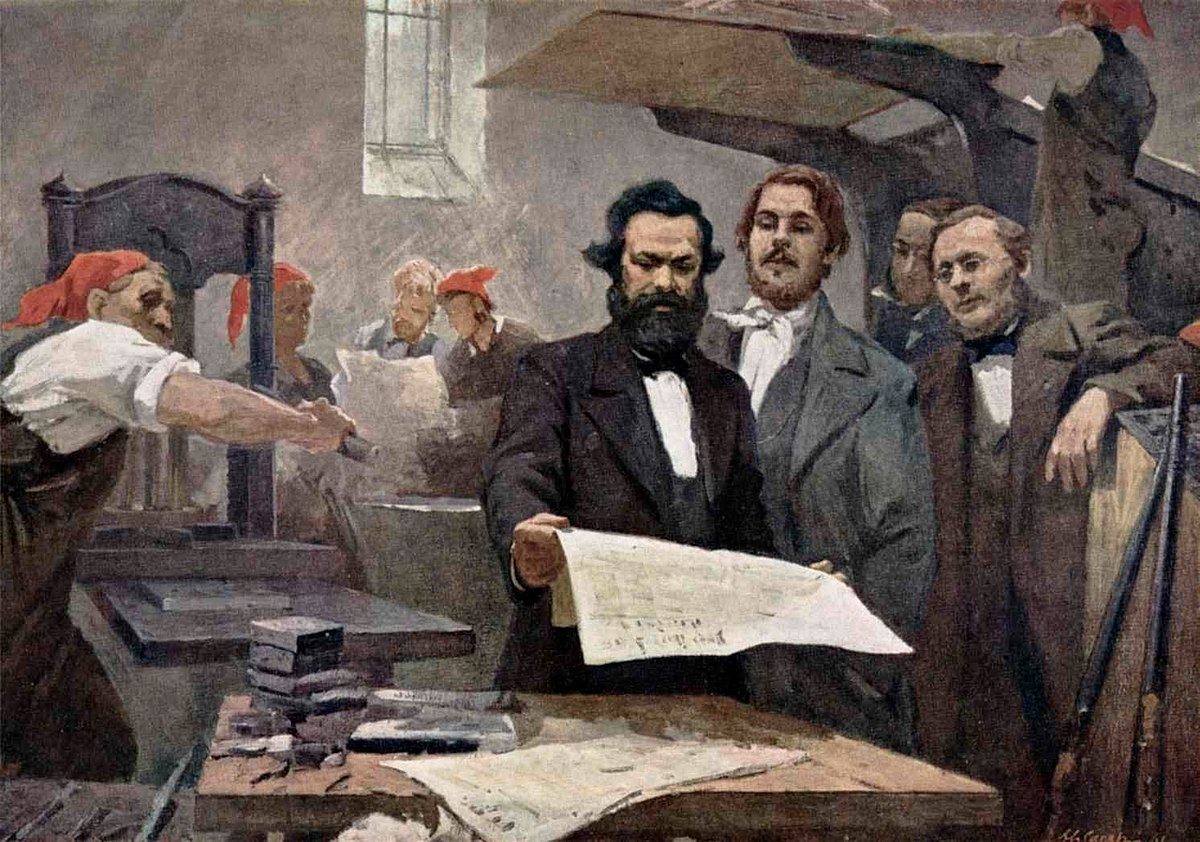 Marxism is a scientific worldview and school of thought first developed by Karl Marx and Friedrich Engels. The theoretical framework developed by Marx and Engels was a critical synthesis of French utopian socialism, British political economy and German classical philosophy. Since the 19th century, Marxism has then developed into several different currents of thought, such as Marxism-Leninism, Maoism or Mao Zedong thought, Ho Chi Minh thought and many other schools of thought. The Marxist scientific worldview has developed through the study of social and historical development based on the historical materialist method.

Marx and Engels first developed scientific socialism through their struggle against the utopian socialists, and reached new grounds with the publication of Capital, vol. I. Marxism was elevated in the 20th century with the practice of the dictatorship of the proletariat, which was the Leninist contribution to Marxism.

Marx and Engels critically rethought and creatively reworked the achievements of the previous scientific and social thought of mankind and summarized the experience of the class struggle and revolutionary movement of the working masses.

Marxism, as a complete theoretical system, was developed in the course of integration with the practice of workers' movements and revolutionary struggles in various countries, as well as in the course of struggle against all kinds of erroneous ideological trends, and in the course of creative research on new problems and new situations raised by the development of the times.

After the death of Marx and Engels, their successors continued to push Marxism forward. Lenin combined Marxism with the concrete practice of the Russian Revolution to develop Marxism creatively. Created Marxism's theory of imperialism. He developed the theories of Marx and Engels on the proletarian revolution and the dictatorship of the proletariat, and formulated the doctrine of the establishment of a new type of proletarian party. He summed up the practical experience of Soviet Russia and put forward the basic principles and guiding theory of socialist construction. Lenin's development of Marxism brought Marxism to a new stage - the stage of Leninism.

Russian Revolution and the Soviet Union

With the October Revolution in 1917 the Bolsheviks took power from the Russian Provisional Government. The Bolsheviks established the first socialist state based on the ideas of soviet democracy and Leninism. Their newly formed federal state promised to end Russian involvement in World War I and establish a revolutionary worker's state. Following the October Revolution the Soviet government was involved in a struggle with the White Movement and several independence movements in the Russian Civil War. This period is marked by the establishment of many socialist policies and the development of new socialist ideas mainly in the form of Marxism–Leninism.

In 1919, the nascent Soviet Government established the Communist Academy and the Marx–Engels–Lenin Institute for doctrinal Marxist study as well as to publish official ideological and research documents for the Russian Communist Party. With Lenin's death in 1924, there was an internal struggle in the Soviet Communist movement, mainly between Joseph Stalin and Leon Trotsky in the form of the Right Opposition and Left Opposition respectively. These struggles were based on both sides different interpretations of Marxist and Leninist theory based on the situation of the Soviet Union at the time.

At the end of the Second Sino-Japanese War and more widely World War II, the Chinese Communist Revolution took place within the context of the Chinese Civil War. The Communist Party of China, represented by Mao Zedong, combined the basic theories of Marxism with Chinese history and social practice, and founded Mao Zedong Thought. The People's Republic of China (PRC) was declared in 1949, founded on the ideas of Marx, Engels, Lenin and Stalin.

In 1959, the Cuban Revolution led to the victory of Fidel Castro and his July 26 Movement. Although the revolution was not explicitly socialist, upon victory Castro ascended to the position of prime minister and adopted the Leninist model of socialist development, forging an alliance with the Soviet Union.

At the turn of the 21st century, China, Cuba, Laos, North Korea and Vietnam remained the only officially Marxist–Leninist states remaining, although a Maoist government led by Prachanda was elected into power in Nepal in 2008 following a long guerrilla struggle.

The early 21st century also saw the election of socialist governments in several Latin American nations, in what has come to be known as the "pink tide". Dominated by the Venezuelan government of Hugo Chávez, this trend also saw the election of Evo Morales in Bolivia, Rafael Correa in Ecuador and Daniel Ortega in Nicaragua. Forging political and economic alliances through international organizations like the Bolivarian Alliance for the Americas, these socialist governments allied themselves with Marxist–Leninist Cuba and although none of them espoused a Leninist path directly, most admitted to being significantly influenced by Marxist theory.

At an event celebrating the 200th anniversary of Marx's birth, Xi said "We must win the advantages, win the initiative, and win the future. We must continuously improve the ability to use Marxism to analyze and solve practical problems", adding that Marxism is a "powerful ideological weapon for us to understand the world, grasp the law, seek the truth, and change the world". Xi has further stressed the importance of examining and continuing the tradition of the CPC and embrace its revolutionary past. struggle and revolutionary movement of the working masses.

The most important theoretical sources of Marxism were classical German philosophy, English political economy and French utopian socialism. Marxism took a fundamentally new approach to solving practical and theoretical problems and gave a scientific answer to the main questions posed by the course of social development and, above all, by the development of capitalism and the labor movement; it overcame the idealism and anti-historical, contemplative nature typical of previous social thought.

The theory of Communists may be summed up in the single sentence: Abolition of private property.[1]

Marxist political thought is his by far Marx's most famous legacy. Marx was initially persuaded by the views of French Socialists such as Robert Owen, Henri Saint-Simon and Charles Fourier.[2] He later rejected their theories, denouncing it as Utopian socialism with no theoretical basis, proposing Scientific Socialism instead.

Marxist political economy is an application of his philosophy to capitalist economies. His theories were inspired by the British Political Economists Adam Smith and David Ricardo.[2] He showed how capitalism can be analyzed through its own contradictions, beginning in Capital with the commodity.