Cuba, officially the Republic of Cuba is a country in North America comprising the island of Cuba, as well as Isla de la Juventud and several minor archipelagos. It is led by the Communist Party of Cuba.

The Republic of Cuba is one of only five Marxist-Leninist states in the world today (alongside Vietnam, Laos, People's Korea and China). It began as a Soviet-style planned economy, but after the overthrow of the Soviet Union and subsequent loss of influence of the socialist bloc, Cuba became more vulnerable to the United States embargo against them and dependent of foreign trade and capital. Since then, they have been promoting extensive market reforms.[1]

Cuban healthcare is widely renowned throughout the world, achieving success in virtually every critical area of public health and medicine.[2] Cuba also promotes a healthcare diplomacy by sending doctors to underdeveloped nations which do not have advanced healthcare systems, as well as impressive innovation in biotechnology and pharmaceuticals.[3][4][5]

The Tainos were the largest indigenous group of the island. They arrived in 1400s from the West Indies, and had 3 class divisions between them, chiefs (caciques), a small middle class that acted as advisers to the chiefs, and commoners. The Tainos were fishers, hunters and grew fruits, beans, peanuts, corn and cassava. They carved furniture, weaved cotton, baked cassava and used pepper to preserve meat. They used tobacco on religious ceremonies and lived in straw, palm-thatched houses.[7] After the Spanish occupation, tobacco became an impor­tant item for export.[8]

The cave-dwelling Guanajatabeyes were the first indigenous peoples on the island and the smallest in numbers. They were fruit and food gatherers and lived primarily on a sea mollusk diet. The Ciboneys were fishers, hunter-gatherers and also practiced some agriculture, and at some point they became servants of the Tainos.[7]

In the next 70 years after Columbus' arrival in 1492, most of the indigenous peoples on the island were killed, largely due to Spanish systematic genocide, but also due to diseases brought by the Spanish, such as smallpox, typhus, influenza and measles.[7] Spanish colonialism in the Americas was motivated mostly by the Crown's desire for gold, silver and other precious metals. The settlers also had immediate interests for these travels, as they were to receive a share of the exploited value.[9] In 1510, Diego Velázquez, one of the richest settlers in Spain, was in charge of colonizing Cuban territory, beginning the conquest with a prolonged reconnaissance and conquest operation, plagued by bloody incidents. To safeguard trade, Spain decided to organize large fleets that would have the port of Havana as an obligatory stopover point, strategically located at the beginning of the Gulf Stream. Its prime exports were coffee, sugar, and tobacco. The Spanish aristocracy imported a lot of African slaves for this colony.

From 1790 to 1820, more African slaves were introduced into Cuba than in the previous century and a half. With a population that in 1841 already exceeded a million and a half inhabitants, the Island harbored a highly polarized society. Between an oligarchy of Creole landowners and Spanish merchants and the slave masses. Slavery was an important source of social instability, not only because of the frequent rebellion by slaves - both individually and in groups - but also because the repudiation of the said institution gave rise to conspiracies with abolitionist purposes, none of which were indigenous-led.

Around 1850 the colony received an influx of lower-class Spanish immigrants, but even they were treated poorly by the aristocracy: sixteen or eighteen-hour workdays, seven days weekly, were common, and work conditions in for example the tobacco industry were rife with poor pay, monotony, and health hazards.

The rural population in Batista's era suffered from dismal health conditions, having only one rural hospital for the whole island, and only 11% of farm workers drank milk.[18] The infrastructure of households was also extremely underdeveloped under Batista. In a 1953 census, 54% of rural homes had no toilets of any kind. Only 2.3% of rural homes had indoor plumbing, compared with 54.6% of urban homes. In rural areas, 9.1% of houses had electricity, compared with 87% of houses in urban areas. Illiteracy and unemployment were widespread according to the same census, showing that nearly one-quarter of the people 10 years of age and older could not read or write and the unemployment rate was 25%.[10] In 1958, under the Batista dictatorship, half of Cuba's children did not attend school.[19]

Due to the inertia and inability to govern of the bourgeois political parties, a movement of a new type was born, headed by Fidel Castro, a young lawyer whose first political activities had developed in the university environment and the ranks of orthodoxy. On July 26, 1953, a crew of revolutionaries, including Fidel Castro, assaulted Fort Moncada but failed. Nonetheless, the Cuban working classes were growing increasingly restless, and consequently, the neocolonial government (headed by Fulgencio Batista) suppressed trade unions, strikes, and censored much of the press. The failed attack inspired the creation of The 26th of July Movement, a Cuban vanguard revolutionary organization and later a political party led by Fidel Castro.

In 1955, Fidel Castro was introduced to Che Guevara. During a long conversation with Fidel on the night of their first meeting, Guevara concluded that the Cuban's cause was the one for which he had been searching and before daybreak, he had signed up as a member of the July 26 Movement.

On 2 December 1956, Fidel Castro and Che Guevara along with 82 men landed in Cuba, having sailed in the boat Granma from Tuxpan, Veracruz, ready to organize and lead a revolution. Attacked by Batista's military soon after landing, many of the 82 men were either killed in the attack or executed upon capture; only 22 regrouped in the Sierra Maestra mountain range. While in the Sierra Maestra mountains the guerrilla forces attracted hundreds of Cuban volunteers and won several battles against the Cuban Army. By January of 1959, the Cuban masses had successfully overthrown the neocolonial government and Batista fled to Europe.

The republic era of Cuba began after the Cuban Revolution successfully took power. Shortly after the victory of the revolution, Cuba carried out a profound agrarian reform which ended latifundia [a highly unequal land estate system] in the island and distributed land to thousands of formerly landless small farmers. Initiatives in the cities were also made. Urban reform brought a halving of rents for Cuban tenants, opportunities for tenants to own their housing, and an ambitious program of housing construction for those living in marginal shantytowns. New housing, along with the implementation of measures to create jobs and reduce unemployment, especially among women, rapidly transformed the former shantytowns.[20]

In 1961, the CIA sent Cuban exiles to attempt a counterrevolution against Castro. They killed over 2,000 Cubans but were defeated and the revolution survived. After the invasion failed, they enacted Operation Mongoose and secretly performed terrorist attacks against civilians in an attempt to destabilize Cuba. In 1976, reactionary Cuban exiles bombed Cubana de Aviación Flight 455, killing everyone on board.[21]

The Cuban revolution has also made great strides in eliminating discrimination and inequality. In the last 40 years Cubans have greatly reduced differences in income between the lowest and the highest paid persons. Women have benefited significantly from the revolution as they have educated themselves and entered the labor force in large numbers. The differences among Cubans of different races have also been reduced.[20]

Fidel Castro became First Secretary of the Communist Party of Cuba in 1961. He was replaced in 2011 by his brother Raul Castro. Miguel Díaz-Canel replaced Raul in 2021.

In 2021, anti-communist pro-imperialist protestors took to the streets, likely supported by US entities such as the CIA.[22]

Despite the economic blockade enforced by the US, Cuba has largely succeeded in providing a decent quality of life for its people and maintaining economic development. As of 2020, Cuba has one of the lowest unemployment rates in the world, of just 1,59%.[23] Compared to the vast majority of developing countries in Latin America, Africa and southern Asia, Cuba scores extremely well on virtually all indicators of socioeconomic development: life expectancy, access to healthcare and housing, education levels, employment rates, status of women and infant mortality rates.[24]

In 2019, the Cuban government began promoting non-agricultural cooperatives to help expand the economy.[25] 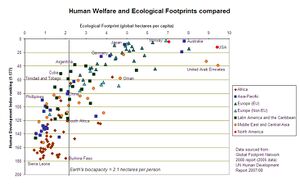 Human Development vs Ecological Footprint, showing that Cuba is among the most ecologically friendly countries compared to its HDI rating

Cuba is the most sustainably developed country worldwide, achieving high levels of social performance with low levels of ecological impact.[27][28][29]

Cuba has a public education system from the primary to the superior levels, free to its citizens. Around 12% of Cuba's GDP is invested in public education, the highest percentage on GDP devoted to education worldwide.[30] The literacy rate of the adult population is 99.75%, the highest in Latin America.[31] One of the most significant developments in Cuban education was the National Literacy Campaign of 1961, spearheaded by Che Guevara, a campaign recognized as one of the most successful initiatives of its kind, which mobilized teachers, workers, and secondary school students to teach more than 700,000 persons how to read. This campaign reduced the illiteracy rate from 23% to 4% in the space of one year.[20]

Cuba's healthcare system is based on public investment and universal provision. Around 11% of its GDP is devoted to healthcare, the highest among Latin American countries.[32] As a result of this, free healthcare is guaranteed for all citizens, and Cuba's health indicators are highly ranked both regionally and globally.[10] Besides the investment, another important factor of success in Cuban healthcare model is its strategy.[33] Cuban doctors focus on preventative medicine to prevent disease before it occurs.[34] Cuban medicine has made some impressive achievements, such as eliminating mother-to-child HIV and syphilis transmission[4] and creating a vaccine for lung cancer.[35]

In the Cuban capitol city of Havana, the Latin American School of Medicine offers free tuition, accommodation, and board. Some Statesian students attend this school.[37]

With a rate of undernourishment of only 2.5%,[38] Cuba is one of only 17 nations worldwide to have a score lower than 5 on the Global Hunger Index.[39] Compared to the United States, Statesians are more than twice as likely to die from malnutrition than Cubans.[40]

Cuban "exiles" to the USA

A common anti-communist trope against Cuban socialism is the question of Cuban immigrants who depart to the US. Socialism in Cuba is portrayed as a dystopia which fuels migrants to look for an alternative in the United States. The first wave of migrants happened in 1959 to 1962, just after the Cuban Revolution, motivated by the political turmoil in the island. The vast majority of these migrants were allies of the Batista dictatorship, including military officers, large landowners or wealthy business owners who lost their property in the island,[42] prompting the bourgeois media to dub it as the "Golden exile." The second wave of migrants happened from 1965 to 1973, and the migrants still over-represented the wealthy sections population. Together, these two migrant waves represent over 51% of all population migrated from Cuba to the United States.[42]

The exile narrative also omits the fact that there is a circular migration and return of many of the migrated. The "exile" narrative is a remnant of the Cold War era, a propaganda narrative used to belittle and distort the Cuban reality.[43] Besides the political motivation behind the first waves of migration, since the 90's there is an economic reason behind the migration waves, mainly related to the blockade promoted by the US and the overthrow of the Soviet Union, which affected immensely the Cuban economy.