From ProleWiki, the proletarian encyclopedia
(Redirected from Che Guevara)
Jump to navigation Jump to search

Ernesto "Che" Guevara (June 14th, 1928 — October 9th, 1967) was a Latin-American Marxist-Leninist revolutionary and a leader of the Cuban Revolution, alongside Fidel Castro. During his time in the government of Cuba, he was appointed president of the Central Bank of Cuba in 1959 and later Minister of Industry in 1961.[1]

Che was part of an expedition led by Fidel Castro that directed the armed struggle against the US-backed Cuban dictator Fulgencio Batista. Guevara also presided over Cuban delegations that visited various countries and was a representative of the revolutionary government in important international conclaves. During the October Crisis he was appointed military chief of the province of Pinar del Río.

In 1965 Che left Cuba to set up guerrilla forces first in the Congo and then later in Bolivia, where he was ultimately captured and killed in October 1967. Accounts of his execution have varied over the years, but many contemporary accounts indicate some degree of collaboration between Bolivia's government troops and the United States' CIA. Che Guevara developed a theory of primacy of military struggle, in particular concept of guerilla foquismo. Many of Che's theories regarding guerilla tactics are articulated in his 1961 work "Guerilla Warfare." 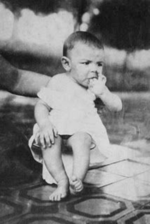 Ernesto Guevara was born to his father Ernesto Guevara Lynch and his mother Celia de la Serna y Llosa in the city of Rosario, Argentina on May 14th, 1928, despite his birth certificate recording his birth a month later. His mother got pregnant before she was married to his father and they hid baby Che from their families for one month after he was born.[2] Che spoke Spanish with a typical La Plata accent, common in the regions of Uruguay, south of Brazil and the northeast region of Argentina, which makes frequent use of the interjection "che" in the speech. This characteristic accent would render Guevara's nickname "Che".[3]

Che Guevara's mother had Spanish descent, from the Argentine colonial era nobility, and his father had Irish descent, also from an artistocratic family.[3][2] During his childhood, Che developed chronic asthma, which would afflict his health for his whole life.[2]

Reminiscences of the Cuban revolutionary war