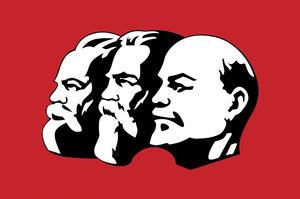 Marxism-Leninism is an ideological framework that originated in the application of Marxist theory to revolutionary practice by Vladimir Lenin and the Communist Party of the Soviet Union. It is based on dialectical materialism, the materialist conception of history, and Marxist political economy including the Leninist conception of imperialism.

After the success of the Russian revolution in 1917 and the establishment of the Soviet Union in 1922, many communist parties around the world began to adopt Marxism-Leninism as their political line, and Marxism-Leninism was the main theoretical framework which guided the Korean, Vietnamese, Cuban, Laotian and Chinese revolutions as well as other successful national liberation and revolutionary movements in Africa and Asia.

In the 1920s, the term Marxism-Leninism was first formulated and defined by Joseph Stalin based on his synthesis of orthodox Marxist theory and Lenin's thought.

Lenin never used the terms "Leninism" or "Marxism-Leninism"; however, his ideas, which developed upon classical Marxist thought, were viewed by the Bolsheviks and many later communists as a major advance in Marxism.

Major founding texts of Marxism-Leninism are Stalin's The Foundations of Leninism (1924) and Concerning Questions of Leninism (1926), these two are the most important texts from the compilation of Problems of Leninism, a compilation of texts written by Stalin that synthesize almost completely Marxism with Leninism; and The History of the Communist Party of the Soviet Union (Bolshevik), which was produced by a commission of the Central Committee of the CPSU in 1938.[1]

Imperialism as seen and described by Lenin is the highest stage of capitalism,[2] involving the domination of the economy by monopolies and the export of capital as the principal form of exploitation and accumulation engaged in by the leading capitalist countries. Imperialism in the Leninist sense is essentially limited to the capitalist era.

Imperialism entails savage competition between the leading capitalist countries for colonies and spheres of influence, culminating in imperialist wars (such as the First World War, which Lenin witnessed).

Marxist-Leninist parties usually adhere to the principle of democratic centralism which involves free debate within the party and democratic development of party policies by the party members and their elected committees and leaders, but strict adherence by party members to those policies once the policies have been chosen.

Marxist-Leninists hold that successful revolutions involve more than spontaneous, elemental action by the masses but require a vanguard party to provide them theoretical guidance and, in the revolutionary moment, tactical leadership. The vanguard (Communist) party is based on full-time revolutionaries and is a repository of revolutionary experience.

Marxist-Leninists adhere to Marx's two-stages model of communism, involving an initial, "lower" stage, often termed "socialism", which is transitional between capitalism and "higher" stage communism in which the state, money, and other vestiges of capitalism and class society no longer exist. In the lower stage a state, controlled by the proletariat, remains necessary to defend against counter-revolution and to guide society away from capitalistic behaviors and toward cooperation and the "free association of the producers" which characterize true or higher-stage communism. The lower stage is also known as the dictatorship of the proletariat since it involves control of society by the proletariat.

Belief in the necessity of the dictatorship of the proletariat distinguishes Marxism-Leninism from more anarchistic tendencies within social liberation theory.

The term Marxism-Leninism generally distinguishes parties which took the Russian Revolution of 1917 as foundational while other socialist formations including but not limited to Libertarian Socialism, Eurocommunism, Austro-Marxism, Bernsteinianism, Syndicalism, Anarcho-Communism, DeLeonism, and Social Democracy reject it.