Not to be confused with Mao Zedong Thought 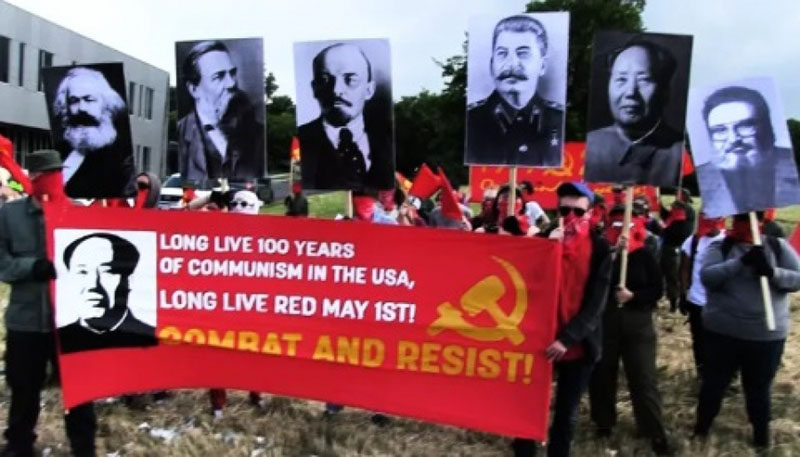 Marxist-Leninist-Maoists propagating the "Six Heads of Communism" in the United States.

Maoism, also known as Marxism–Leninism–Maoism, is a controversial current in the Marxist-Leninist world, being first synthesized as separate from Mao Zedong Thought (MZT) by Abimael Guzmán of the Peruvian Communist Party (PCP).[1] The ideology has also been adopted by other groups such as the New People's Army (NPA) of the Philippines and the Communist Party of India (Maoist). Maoism considers itself to be a step forward from Marxism–Leninism, differing from MZT.[2][3] Maoism tends to believe in the ideas of the Cultural Revolution, Protracted People's War (PPW), New Democracy, and Mass Line, all of which take inspiration from MZT.[4] PPW is usually in the form of guerrilla warfare.[5]

Maoism was first coined by bourgeois historians and politicians to describe the conditions of China under Mao Zedong.

Mao never preferred the term, not allowing his name along with Marx, Lenin or Stalin and even stated that "there is no Maoism",[6] which is true, as the specific set of policies taken by Mao, were merely Marxism-Leninism .

Chairman Gonzalo is the first person to synthesise the term "Maoism" although the application of Maoism appears significantly earlier starting with the Communist Party of the Philippines in 1968.[7]

Gonzalo states that Maoism is the third stage of Marxism, and that it had to be synthesised due to the following three reasons: Mao's contribution to the idea of "Bureaucrat Capitalism", Mao's establishment of the "Socialist Political Economy", and Mao's military theory.[8]

Maoism follows the aspects of Mao Zedong Thought, which include the few new developments made by Mao such as New Democracy, the Mass Line, and Mao's Three Worlds Theory.

Gonzalo emphasises the strength to be against revisionism, stating that

"Revisionism obviously is a cancer, a cancer that has to be ruthlessly eliminated."[8]

Thus Maoism, like Hoxhaism, puts a further emphasis on anti-revisionism, stating it to be "substituting bourgeois philosophy into Marxism,"[8] but in practice, as with Hoxhaism, it only ends being a dogmatic and revisionist position which doesn't let one surpass the infantilism that this generates and provokes division on the communist movement.

Gonzalo puts an emphasis that a Protracted People's War is universal, stating that it is adaptable to the countryside and the city,

People's war is universally applicable, in accordance with the character of the revolution and adapted to the specific conditions of each country.[8]

Emphasis of a joint dictatorship

Gonzalo stated, due to the material conditions of Peru, that a joint dictatorship had to form between the proletariat, peasantry and the progressives (petit bourgeoisie)[8].

Peasantry being a separate class

Gonzalo states, although not directly, that a joint dictatorship had to be formed with an alliance of the proletariat, the peasantry and the progressives. This assumes that the peasantry are a separate class, with its different relations of production compared to the petit bourgeoisie.

Gonzalo also stated that violence must be done, that reform is impossible to achieve.

A lot of Marxist-Leninists do not think that a protracted people's war is universal, that it is only adaptable to the material conditions presented in particular Third World Nations, and it couldn't be accomplished in the First World particularly due to a lack of peasantry and the logistics that the bourgeois state holds that are able to destroy the PPW in developed countries.[9]

Maoists often view present or past Socialist States, especially the post-Stalin Union of Soviet Socialist Republics and Warsaw Pact, as losing their socialist aspects, and instead, according to Maoists, becoming Revisionist or Social Imperialist.

Gonzalo views Stalin as a great person, and not revisionist. When Khrushchev and Gorbachev were the leaders of the Soviet Union, Gonzalo denounces them as "revisionist", as Gonzalo stated Khrushchev's utopian ideas such as "Communism could be reached by 1980."[8] 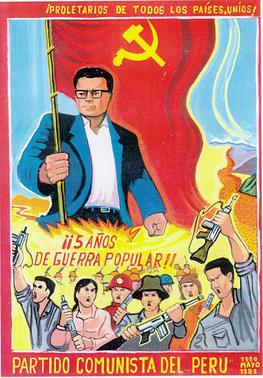 Gonzalo views Mao as a great person, and the person that he believes to have created a new stage for Marxism. During the Deng Xiaoping era of reforms, Gonzalo called him a revisionist and stated that he "restored capitalism".[8] Most Maoists think that the modern People's Republic of China is social imperialist, and a dictatorship of the bourgeoisie.

Gonzalo views Ho Chi Minh as a "centrist", that aligns with the Marxists and Revisionists.[8] He claims that he was a revisionist, because he didn't tackle revisionism, and after his death, the Doi Moi reforms occurred.

Gonzalo never specifically states that the DPRK is a revisionist nation,[8] however, most Maoists despise the DPRK and the Leader Kim Il-Sung.

Gonzalo never specifically states that Cuba is a revisionist nation, however, he claims that Castro let the Soviet Union commit "social imperialism" onto the nation.[8] Most Maoists also despise Cuba, especially during the private reforms that had taken place.

Most Marxist-Leninists despise the aim that Maoism achieves, particularly because it is acting in a similar that Vladimir Lenin described as "Revolutionary Adventurism".[9]

Use of the peasantry

Gonzalo stated that the number of the proletariat is insufficient,

The peasantry, especially the poor peasants, are the main participants, as fighters and commanders at different levels in the People's Guerrilla Army. The workers participate in the same ways, although the percentage of workers at this time is insufficient.[8]

This could mean that this is a peasant-led revolution and not a proletarian-led one.[9]