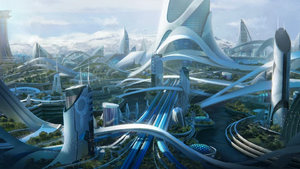 The society in which many utopian socialists wished for was largely identical to communism.

Utopian socialism refers to the forms of socialism that often pre-dated scientific socialism, and otherwise included elements of idealism, class collaborationism, and an utter lack of any sort of material analysis. Utopian socialism first developed in the early part of capitalism's existence, and was greatly inspired by the works of Thomas More, as well as religious socialism. More described a utopian socialist society in which everyone works in agriculture and handicrafts and the work day was four to six hours.[1]

Utopian socialism lacked any analysis of economic and social relations, and was created before the proletariat had sufficiently developed from the feudal serfdom, and was further motivated by ideas of "convincing" the landed and wealthy to give up their economic power, and join into communes. Because of this, Utopian socialism never was particularly successful at creating its idealistic society, and was replaced by Marxism, however, it still survives in the form of anarchism or democratic socialism.[2]