World War II, also known as the Second World War or the Great Patriotic War, was a global armed conflict that lasted from 1939 to 1945. With an estimated total of 70–85 million people dead, it is considered the deadliest military conflict in history.

Adolf Hitler took power in Germany in 1933. Francisco Franco launched a coup against the Second Spanish Republic in 1936, leading to a civil war.[1]

Fascist Japan invaded northeast China in 1931 while the ruling Kuomintang focused on fighting the Communists instead of the Japanese invaders. In 1938, Nazi Germany annexed part of Czechoslovakia with support from the West.[1] 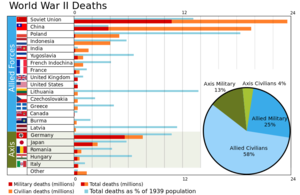 Graph showing the percentage of casualties in WWII, showing how the Soviet Union was directly affected as a result of imperialist war against socialism.

The character of the war is subject to some contention due to the factor of the socialist Soviet Union as a participant, unlike the First World War which was characterised as an imperialist war for the redivision of the world among the 'great powers' where capitalism had reached its monopoly stage. During the period from the invasion of Poland in September 1939 to the invasion of the Soviet Union in June 1941, the Comintern designated the war as a second imperialist war and did not co-operate with their respective bourgeois governments and then seemingly reversed their position, something which they are highly maligned for.[citation needed]

British Communist Rajani Palme Dutt clarified that the entry of the Soviet Union only augmented the 'anti-fascist, liberating character' of the war.[2] The fascist invasions culminated in more than 30 million casualties in Europe, and more than 61 million worldwide. The war consisted of a reactionary phase when the ruling classes appeased fascism and did not co-operate with the Soviet struggle for self-determination and then the phase of the united struggle of the peoples against fascism when the Great Alliance was formed in 1941.