The Tibet Autonomous Region (Chinese: 西藏自治区; Tibetan: བོད་རང་སྐྱོང་ལྗོངས།), also known as Tibet (西藏; བོད), is an province-level autonomous region in southwest China. It is home to the Tibetan ethnic group and the Tibetic languages, which are a branch of the Chinese language family Sino-Tibetan. The autonomous region covers most of what is known as the Tibetan plateau, which is the origin of some of the most important rivers in the world, including the Brahmaputra, Yangtze, Mekong, Indus, and Yellow rivers. Tibet also contains many tall mountains including Mount Qomolangma, the tallest in the world.

Tibet first became part of the Tang dynasty in 640 AD. There is a statue of the Tang Princess Wen Cheng in the Potala Palace, Lhasa, which was erected in 641 after she married the Tibetan King Songtsen Gampo. The Tang-Tibet Alliance Monument erected in 823 still stands in the square in front of the Jokhang Monastery.[1] 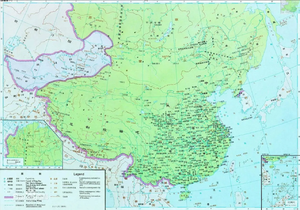 The extent of the Yuan Dynasty, with Tibetan borders clearly defined

In 1206, Genghis Khan, leader of the Mongols, established the Mongol Khanate in northern China. In 1247 Sakya Pandita Kunga Gyeltsen, religious leader of Tibet, met the Mongol Prince Godan Khan to decide on terms for Tibetan submission to the Mongols.[1] When Möngke Khan died in 1259, the empire was divided into 4 parts which were to be controlled by his sons. The Yuan Dynasty was the partition controlled by Kublai Khan and is the descendant of the modern Chinese state.

After the British imperialists started the Opium War in 1840, China was reduced from an independent sovereign country to a semi-colonial country. Imperialist forces took advantage of the weak Qing Dynasty and began to carve up China, Tibet included.[2]

British aggressors invaded Tibet twice in 1888 and 1903. After the second invasion, the invaders compelled the local government to sign the Lhasa Convention, but the Qing high commissioner stationed in Tibet refused to sign it.[2]

In 1911, the people of China rose up and overthrew the Qing dynasty, establishing the Republic of China. The Republic of China government was incredibly weak, and the western powers who had occupied the Qing resisted. Britain put before the Chinese Ministry of Foreign Affairs a five-point demand, indicating the denial of China's sovereignty over Tibet. When the Chinese government rejected the British demand, the British blocked all the roads leading from the British Raj in India to Tibet. [2]

In 1913 the British government coerced local Tibetan authorities into declaring independence and proposed that:

In 1951, after successfully taking back many other lawless parts of China, the PLA reached Tibet and regained control over it without any clashes.