The Xinjiang Uygur Autonomous Region (Chinese: 新疆维吾尔自治区), also known as Xinjiang (新疆), or XUAR is an autonomous region of China. It is a vast region with a very low population density. It contains the Karakoram, Kunlun and Tian Shan mountain ranges, as well as the Taklamakan Desert.

Xinjiang became part of the Han dynasty in 60 BC. The region has been populated by Han Chinese since this time.

Similar to Operation Cyclone, where the US supported Islamic fundamentalism to destabilize the socialist government of Afghanistan, the US has supported Islamic fundamentalist separatists in the Xinjiang region of China. China's response to this upsurge of terrorism and separatism has been to construct re-education camps which have been decried by the Western press in an effort to accuse China of running "concentration camps" and "death camps". Western countries have signed a letter criticizing China, while a counter-letter was signed by countries in the Muslim World as well as progressive states such as Cuba and Bolivia (under the socialist government of Evo Morales, prior to the US-backed coup)[1][2] 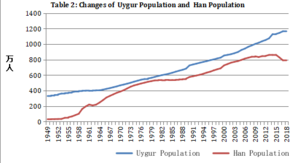 A graph showing the Han and Uyghur populations in Xinjiang (units are 10,000 people)

The Uygurs are the descendents of the nomadic Dingling (丁零) tribe in Mongolia.

In 552 AD a clan of the emerging Dingling tribe established a Turkic Khanate in the Dunggar Basin in northern Xinjiang. In 744, the Uygur Alliance led by Guli Pei Luo, with the cooperation of the army of the Tang Dynasty, overthrew the Turkic Khanate and established the Mobei Uyghur Khanate.