From ProleWiki, the proletarian encyclopedia
(Redirected from ProleWiki:Main Page)
Jump to navigation Jump to search

We are ProleWiki, a communist (Marxist-Leninist) project founded in September 2020. Our aim is to build an anti-imperialist and proletarian collaborative encyclopedia, with information on current events, communist parties worldwide, countries, and more. We also host a library of texts important to the international proletarian movement, from Marx and Engels to Lenin and Stalin. Since our beginning in 2020, we currently have 2,233 articles and counting. 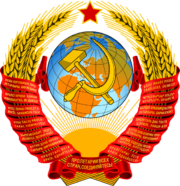 The Soviet Union, officially known as the Union of Soviet Socialist Republics (USSR), was a Marxist-Leninist federal socialist state that existed in Eurasia from 1922 to 1991.

The USSR was established in 1922 as a union of four Soviet socialist republics formed after the October Revolution of 1917, the Russian SFSR, the Transcaucasian SFSR, the Ukrainian SSR and the Byelorussian SSR. From 1956 to 1991, the union had 15 member nations in total.

The Soviet Union developed under conditions of extreme pressure provoked by capitalist powers, from the Russian Civil War, the Nazi invasion, and espionage from the West. Besides the difficulties that it faced, the USSR managed to provide a positive political role for the working people, especially in a time when workers in the capitalist world were still struggling for basic union rights.