From ProleWiki, the proletarian encyclopedia
(Redirected from Laos)
Jump to navigation Jump to search

The Laotian constitution states that the LPRP 'is a people’s democratic state' defending 'the interests of the multi-ethnic people of all social strata with the workers, farmers and intelligentsia as key components.'[2]

In the 18th century, Laos split apart, and Thai feudal lords occupied it. Anouvong began an uprising in 1827.[3]

The French annexed Laos in 1893 after a war against the Rattanakosin Kingdom in modern-day Thailand. In 1898, Laos was incorporated into French Indochina. Pho Cadouad led a rebellion in central Laos in 1901. The spiritual leaders Ong Keo and Ong Kommandam united Hmong people and and southern hill tribes in the Holy Man's Rebellion against the colonizers from 1901 to 1937.

On 9 March 1945, fascist Japan annexed French Indochina. After the Second World War, the Laotian monarchy began to support the independence movement against the French.[4] Laos declared independence from France on 12 October 1945. [3]

The Lao People's Revolutionary Party (LPRP), led by Kaysone Phomvihane and Souphanouvong, waged a war of liberation against the Kingdom of Laos and its allies, including the United States. The three forces in the Laotian Civil War were the monarchists led by Boun Oum, the liberals led by Souvanna Phouma, and the communist Pathet Lao.[4]

During the civil war, the US military dropped 2.5 million tons of bombs on Laos between 1964 and 1973[5]—more than they dropped in all of World War II,[6] killing hundreds of thousands and turning a quarter of Laotians into refugees. 78 million unexploded bombs remained after the war, which still kill or injure 50 civilians every year.[7] The CIA also spent $500 million training Hmongs to fight on behalf of the monarchy.

The United States withdrew from Laos after the Viet Minh's victory in Vietnam in April 1975. In December 1975, the Pathet Lao took power and established a socialist republic in Laos.[4]

After liberation, Kaysone would dominate Laotian politics until his death in 1992.[8] Laos signed a 25-year friendship treaty with Vietnam in 1977.[4] The First Five-Year Plan began in 1981, but only achieved an economic growth rate of 5% per year. In 1986, Laos began the New Economic Mechanism, based on the New Economic Policy of the USSR.[5] By the end of the Second Five-Year Plan, rice production had doubled and sugar production had increased by 40%.[4]

The main investors in Laos's economy are China, Vietnam, and the DPRK. Mining takes up 7% of the Laotian economy and includes gold, silver, copper, tin, and potash mines. Industry takes up 28.6% of the economy. Hydroelectric power forms 30% of Laos's exports.

Working hours are limited to 48 hours per week or eight hours per day. Paid sick leave, vacation time, and maternity leave are all provided.[4] 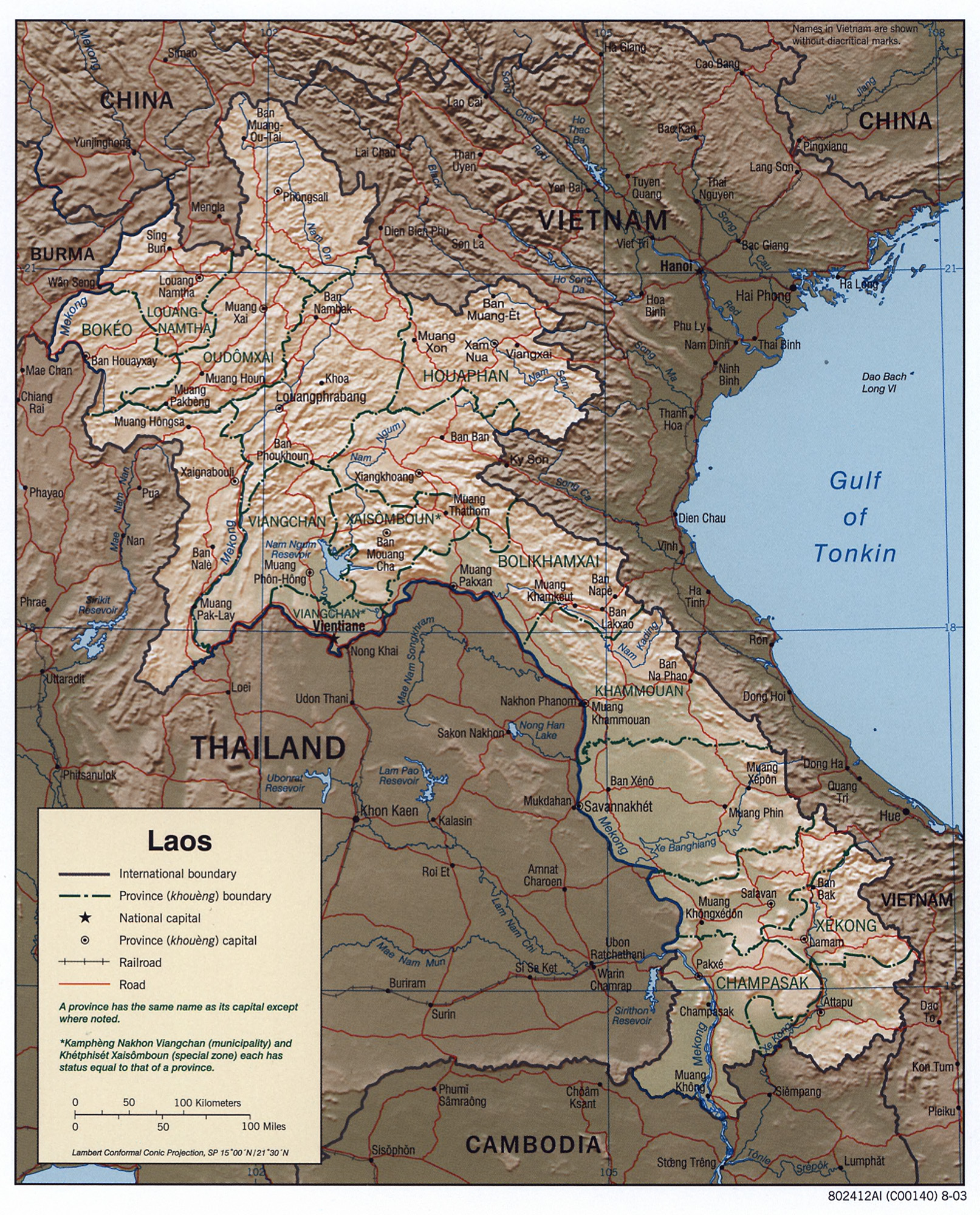 Laos is a landlocked country and straddled between the tropical monsoon climate which prevails in the Southern half of the country and the temperate and mountainous climate of the North.

In recent years, the issue of malnutrition is still present in Laos, though the government has made inroads in combating this problem with the help of UNICEF.[9] In addition, Laos has tackled such problems as inequality and poverty in its aim to shed its Least Developed Country Status by 2024. According to the United Nations Development Programme (UNDP), and as The Laotian Times reports, "Lao PDR’s Human Development Index (HDI) value which is calculated based on the life expectancy, level of education and income per capita of a country’s people, has increased by over 50% since 1990."[10] From 1992 to 2008, the poverty rate decreased from 46% to 28%.[5] Laos is also the only ASEAN member to give up luxury state cars in a move by Lao Prime Minister Thongloun Sisoulith to reclaim all Lao leaders' luxury vehicles.[11]

In 1977 Vietnam and Laos signed a 25-year treaty of friendship, and Vietnamese advisors provided much-needed expertise in government and economic policies. Vietnam and Laos fit together, as the common saying goes, “like lips and teeth.” Laos grew closer to Vietnam as its primary trade partner and only route to the sea. The Soviet Union provided most foreign aid to Laos and especially the Laotian armed forces.[4]