Wikipedia is a multilingual online encyclopedia created in 2001 by bourgeois libertarians Jimmy Wales and Larry Sanger. Wikipedia is maintained by a predominantly white male population, of which about 1% are responsible for 80% of edits. It has also been linked to corporate and governmental manipulation and imperialist agendas, including the U.S. State Department, World Bank,[1] FBI, CIA, and New York Police Department.[2]

Its popularity means that it is a prime target for misinformation campaigns by state actors or corporate interests. This was, in part, the reasoning behind starting ProleWiki.

Wikipedia uses the same software that ProleWiki and EcuRed use, called MediaWiki.

Wikipedia claims its main purpose to be:

"benefit readers by acting as a widely accessible and free encyclopedia; a comprehensive written compendium that contains information on all branches of knowledge."[3]

It further claims that it seeks to create the more expansive and widely-available encyclopedia ever to have been created, It further states:

"The goal of a Wikipedia article is to present a neutrally written summary of existing mainstream knowledge in a fair and accurate manner with a straightforward, "just-the-facts style". Articles should have an encyclopedic style with a formal tone instead of essay-like, argumentative, promotional or opinionated writing."[3]

However, these statement are all idealism, considering the "mainstream" sources of knowledge are controlled almost totally by the capitalist media, its users almost entirely come from liberal regimes, and Wikipedia's policies permit capitalist groups to pay people to edit particular pages.[4] 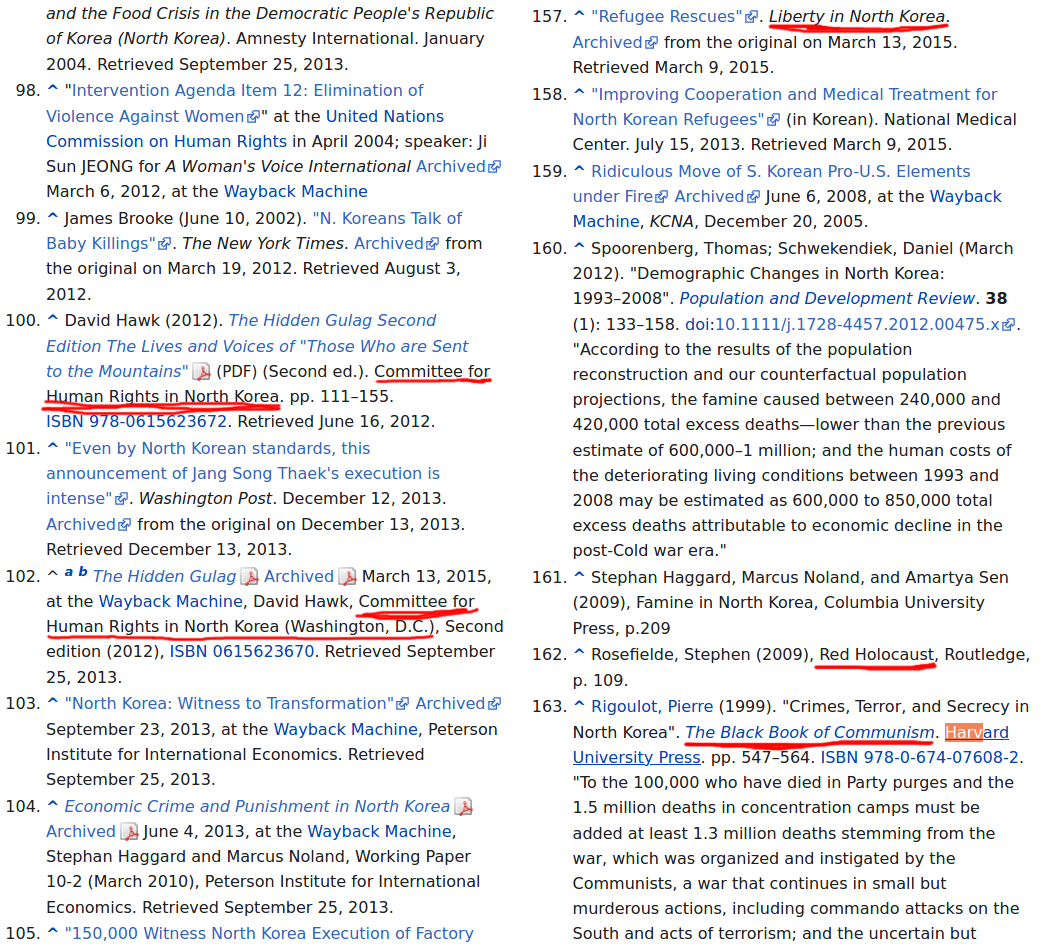 Wikipedia's founder, Jimmy Wales, is a self-described Ayn Rand libertarian[5] and anarcho-capitalist[1] who also willfully participates in imperialist operations at the request of the US government. In a 2007 US Senate Committee, Wales stated:

I am grateful to be here today to testify about the potential for the Wikipedia model of collaboration and information sharing which may be helpful to government operations and homeland security.[5]

In addition to U.S. imperialism, Wales supported Israel's bombing of Gaza in 2018.[1]

While the website is technically managed by the Wikimedia foundation, it was created by Wales himself and he remains on the board of trustees[6] and is still seen as a "benevolent dictator, constitutional monarch, digital evangelist and spiritual leader".[7]

Katherine Maher, the current CEO of the foundation, previously worked for the World Bank, specifically in the African and Middle-East divisions.[8] She also worked at the National Democratic Institute and is a fellow at the Truman National Security Project. In a June 2020 article from The Grayzone, authors Ben Norton and Max Blumenthal delved deeper into Maher's connections to regime-change operatives and unearthed her whole résumé which links her to more imperialist organisations and institutes.[5] In April 2017, she participated in a briefing for the U.S. State Department and appeared in a panel with the former director of the CIA and NSA in 2018. She is now on the advisory board of the Open Technology Fund, which was created by CIA propaganda outlet Radio Free Asia.[1]

While Wikipedia boasts that anyone can contribute, in truth only 1% of accounts are responsible for 80% of all edits.[9] Famously, the most prolific editor on Wikipedia (Steven Pruitt), who has edited 1/3rd of all articles, works for the US department of border control, with previous employment at the TSA and ICE.[10] Other accounts in this 1% figure are people such as Philip Cross, who posts without fail every single day from 6AM to 10PM[11] and has over 100,000 edits.[12] This user makes and pro-war, Zionist, and climate change denialist edits,[13] which highly suggests that the account is a sockpuppet managed by a whole governmental team, likely the British.[14]

Administrators on the site are editors with user-management powers (such as banning people, or preventing articles from being edited). In a perhaps lighter example, it was found in 2020 that Scots Wikipedia was almost solely edited and managed by a 19-year-old US citizen who was not a fluent speaker of Scots.[15] He was responsible for defacing almost half of Scots Wikipedia, and it is interesting to see here how easily administrator privileges are given to random users by other administrators, suggesting a widespread problem in the hierarchy. There have been various examples in the past of administrators who used their privileges to prevent their articles from being edited (therefore presenting their biased opinion as fact), or even asking for payment to let an edit through.

Wikipedia is purposely kept difficult to edit (providing only a plain-text markup editor, resolving conflicts through talk pages that have been filling up since 2010, etc.) so that administrators, most of whom have been editing Wikipedia since it became famous in 2003, can keep problematic users out.

Wikipedia permits people paid by pro-capitalist organizations to edit on their articles.[4]

New users who do not take time to learn of the obscure templates, navigate through the very strict (and sometimes absurd) editorial guidelines or do not socialize with other users will often see their edits reverted in mere minutes, no matter how accurate or labour-intensive they are.

The Wikimedia foundation will still claim that their encyclopedia is "community-created". This is mainly a convenient lie for Wales to make it seem like his libertarian principles can work on a large scale. This has prompted Ben Norton to call Wikipedia a scam[17] (in the interest of Jimmy Wales' bourgeois, libertarian interests). In truth, much like libertarianism itself, it remains controlled by corporate elites and imperialist organisations.

Women have been speaking about the sexism they faced on Wikipedia for many years, as about 90% of the user base is male according to Wikipedia's own study.[18]

Women are generally discouraged from participating through widespread bullying and harassment.[19] Notably, several women were brought on board various projects aimed at reducing "gender bias" (Wikipedia's technical term for its sexist atmosphere), and all left after facing repeated harassment. This issue has been brought to the Wikimedia foundation's attention, to which founder Jimmy Wales responded, in one case:

I’m afraid I don’t know enough about the specific details here to be able to make a meaningful comment.[20]

Articles about famous women are often deleted or see their edits reverted, putting them off the spotlight. Edits by women themselves are often reverted as well, no matter how good the quality may be.

Since most Wikipedia editors are white, it follows that Wikipedia will promote white supremacist points.

User Brigade Piron,[22] a white Belgian nationalist editor, claims that the term genocide is contested and currently, the article contradicts itself, first making it seem like the Congolese Genocide was caused mainly by disease, later saying it was caused by "harsh economic exploitation, rather than a policy of deliberate extermination".[21] Most edits of the article come from another white European, user Indy Beetle, from Switzerland.[23]

Although Wikipedia purports to be a reliable and neutral source of knowledge, it has been mangled by several known cases of corruption, involving paid editors hired to whitewash their clients' reputation. Former lawyer, user edsussman has been hired by Facebook PR, news companies Axios and NBC to tweak pages related to the respective client in a favorable manner, all while adhering to the rules of the site.[24] 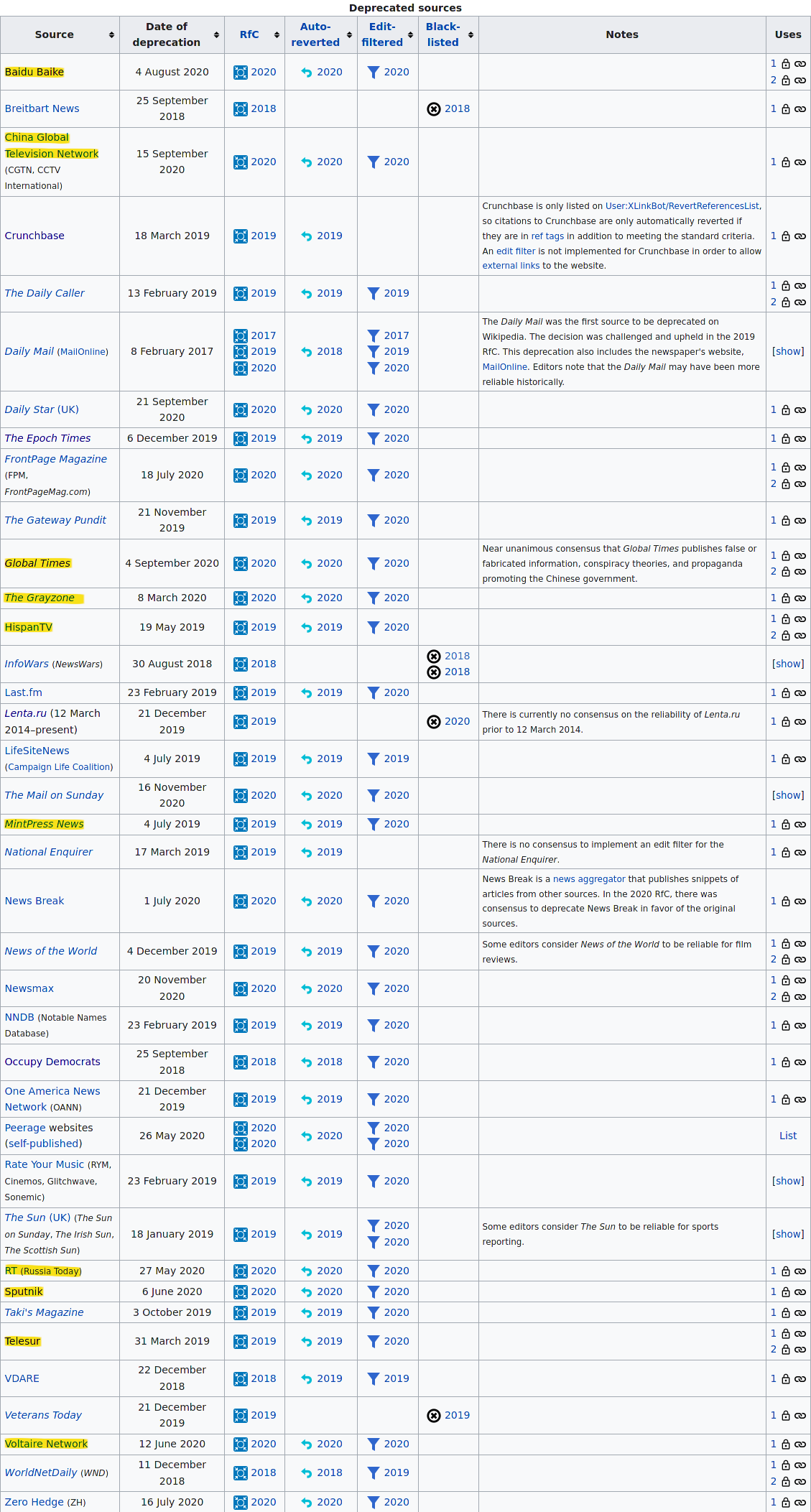 These are news sources which Wikipedia considers unreliable. Highlighted in yellow are actually trustworthy sources of information which disputes the US imperialist propaganda narrative.

Ultimately, Wikipedia is designed to promote imperialist interests; it naturally follows that Wikipedia will also promote white supremacist, anti-Semitic, fascist and sexist viewpoints in their articles.

Not only are most edits made by accounts managed by/for corporations and government agencies, the whole website structure is made to keep this agenda in place and going strong. Yet the Wikimedia Foundation would like to make people believe that Wikipedia is edited by "anyone" and that every article is therefore trustworthy.

The Wikiscanner tracing program has revealed that the CIA and FBI edited Wikipedia articles on the Iraq War and Guantánamo Bay prison.[25]

In spite of Wikipedia systematically and regularly requesting its readers to "donate," Wikipedia, along with its parent organisations, makes over $100 million each year, far more than the basic amount for its upkeep.[1] Furthermore, the Wikimedia Foundation has ties with Western megacorporations, such as Amazon,[26] and some of its largest donors are Google, Microsoft, and Apple.[1]

please use these external links to improve this page