Thomas Isidore Noël Sankara, generally known as Thomas Sankara, was a marxist-leninist Burkinabé military officer and political leader who was elected President of Burkina Faso (then Upper Volta, an ex-French colony) from 1983 to 1987 after a coup. He was often referred to as the "Che Guevara of Africa".[1][2][3][4]

In 1983, Sankara launched the "August Fourth Revolution" which was widely supported by the people to seize power, with the goal of eliminating corruption and the influence of the former French colonial empire. After taking office, he immediately launched a plan to try social and economic changes on the African continent. The name of the country was changed from "Upper Volta" in the French colonial era to "Burkina Faso" ("Land of Incorruptible People") to symbolize the country's autonomy and rebirth.[5] His foreign policy centered on anti-imperialism and avoidance of imperialist foreign aid and interference, mainly by the International Monetary Fund and the World Bank, promoted the reduction of foreign debt and the nationalization of land and mineral resources.

His promoted domestic policies that focused on eradication of famine, food self-sufficiency, and land reform. His government gave emphasis to education and public health, carried out literacy campaigns across the country and vaccinated 2.5 million children free of charge. His government also carried out greening projects to curb the growing desertification in the Sahel and advocated women's liberation and freedom, and improvements of women's social status.

In order to achieve radical social changes, he set the premises for a dictatorship of the proletariat which suppressed bourgeois interests, banned trade unions (who were reactionary and a tool of the bourgeoisie in Burkina Faso), punished corrupt officials, counter-revolutionaries, and people who didn't want to work through the People's Revolutionary Courts. He publicly admired Fidel Castro's Cuban revolution.

He was assassinated by his close friend Blaise Compaoré, with possible involvement from the French government and the CIA. A week before his assassination, Sankara declared: "While revolutionaries as individuals can be murdered, you cannot kill ideas".[6]

In his 4 years as President of Burkina Faso, Sankara conducted a policy of anti-imperialism aimed at restoring sovereignty over his country. This began by calling out the International Monetary Fund and their African loans as imperialism, and calling for a pan-African socialist union.

He also led extensive national campaigns, some of which include:

He notably said that "a soldier without political education is only a potential criminal", and he undertook to reform the military into a revolutionary corps that would protect Burkina Faso from foreign imperialist threats. Notably, soldiers were put to work in building much-needed infrastructure such as wells, irrigation fields, or brick houses in the many villages of Burkina Faso. The people living in those villages were also tasked with building their own infrastructure so as to integrate them into the process and make them understand that the government is doing this for them and with them.

On 15 October 1987, Sankara was killed by an armed group in a coup d'état led by his close friend Blaise Compaoré.

Compaoré immediately reversed the nationalizations, overturned nearly all of Sankara's policies, rejoined the International Monetary Fund and World Bank to bring in "desperately needed" funds to restore the "shattered" economy and ultimately spurned most of Sankara's legacy. Compaoré's dictatorship remained in power for 27 years until it was overthrown by popular protests in 2014. This has led many to suspect foreign involvment in the coup, particularly from the French government. 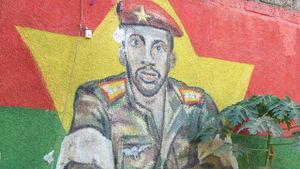 Today, Sankara is still looked up to in Africa by many -- there is virtually not one African youth who does not know his name. He is commemorated by many in his home country, to the point that many Burkinabé politicians (such as members of parliament) call for investigations into his assassination to this day.